The Chemic Boys Bowling team finished undefeated in the Saginaw Valley League conference season and earning its second championship in three years.  Chemics.net sat down with Eric Kalishek, Izaac Goergen, Collin Terrill, and head coach Trevor Terrill  to reflect on the conference championship and look forward to the post-season.

Q1. Prior to the start of the year, did you see your team going undefeated during the SVL season?

Izaac Goergen: We had the same starting lineup as last year and to be able to feel comfortable with the same people was a good head start to have, I thought we had what it took to win every match of the year but it was the perseverance we had throughout the year that really solidified my confidence

Collin Terrill: Yes, it was my goal to push the team for an undefeated season because I knew we had a chance and the first step is believing.

Eric Kalishek: Yes, I knew that we would be undefeated before the start of the season. After last year I knew our potential going forward and that that we could go undefeated.

Coach Terrill:  Yes, this team should have gone undefeated last year but we got in our own way.  Problems fixed and we set goals as this being the first goal winning the SVL.

Q2. You had at least one really close match (John Glenn) when the outcome was in doubt.  How did you come together as a team during that match to squeak out the win?

IG: We had had close matches before and we felt this was no different, we knew the shots were there and we just had to execute like we knew how. Once we got momentum going we just rolled with it and it was really cool to see everyone supporting each other the whole time.

CT: We all cheered each other on in the 10th frame and prior to that we didn’t get mad or have any frustration towards that person for making a bad shot because we all knew we had to believe in each other to win the match and come from behind.

EK: We came together in the last game, we got some confidence back and started bowling like the team we were, a big part of it was we got loud at the ending of the last game.

Coach: This team just found ways to win points, making spares, and the maturity of not letting bad shots, or the other team’s bad shots dictate our next shot.  Also give credit to Ruberto Mosqueda who lost his voice cheering us on that night.

Q3. Your team qualified for the state tournament last year by finishing 3rd in the regional.  What do you think are your prospects for the post season tournament in 2020?

IG: I think we are even better than last year, and coming in with the experience of being there once already I believe we can succeed and give ourselves a run at some big accolades.

CT: I think even though we went undefeated, it’s going to be a lot tougher to make states because we have tougher schools that have entered into a regional so it won’t just be a walk in the park like some might think it will be.

EK: I think that we will go into regionals strong, and dominate. Then go to States, where we aim to take first.

Coach: Well the High School Association has added a couple more teams to our regional which has strengthened our regional.  On top of having most of our SVL teams in our regional too.   We are a great goal-oriented team and that is our next goal is to be in the top 3 and advance to the State Finals. As of last rankings for the Coach’s Association we were ranked 5th with Oxford being ranked 4th in our regional. 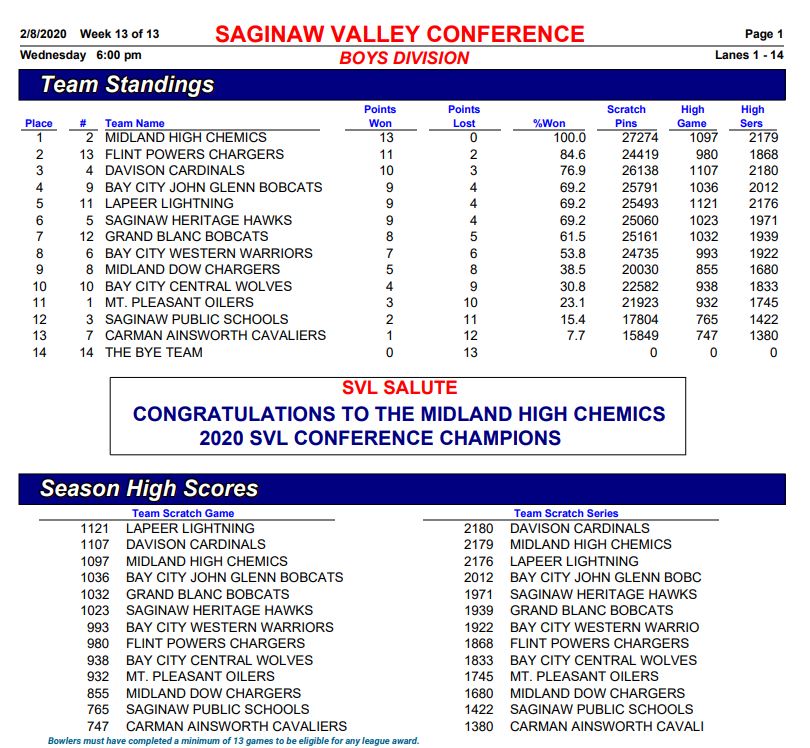 Our League is bowled on the Allen Pattern