Two Chemic Football players signed their National Letter of Intent to play NCAA Division II football this week.  Offensive Lineman, Solomon Thomas (Davenport University) and placekicker, Maxx Fisher (Wayne State University), were both All-League players for the Chemics in 2019.  Chemics.net caught up with them to get their thoughts on the recruiting process and what comes next for their football careers. 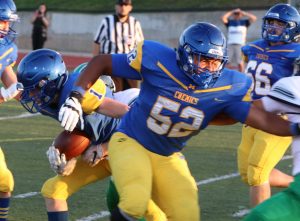 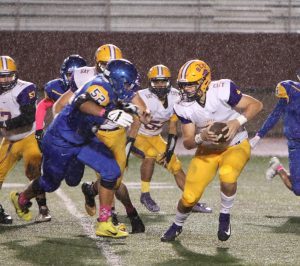 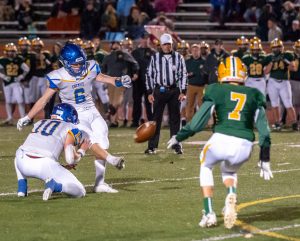 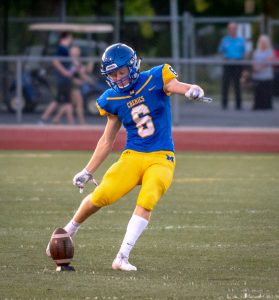 Q1. When did you realize that playing college football was going to be an opportunity for you?

Maxx Fisher:  I thought I might have a chance to play college football after my JV season, which is when I started to take kicking much more serious. But after junior year is when I first started getting in contact with college coaches.

Solomon Thomas: Ever since I was little I’ve always worked hard, my dad has always pushed me and taught me how to play the game the right way. After my sophomore season I really knew I could play at the next level and that resulted in my quitting baseball to pursue my dreams of playing college football.

Q2. Describe the recruiting process you went through.  What advice would you give an athlete who may face the same decisions that you did next year?

MF: The spring after my junior season, I sent out my film, achievements, stats, and GPA to a lot of the schools in the Midwest, and I started to get in contact with some college coaches. I went on a few junior day visits, and at the beginning of the summer I attended a few camps that I was invited to. I continued to train over the summer and then when the football season came around recruiting died down. I went to a few game day visits at different schools, and about halfway through the season I sent out my updated test scores, GPA, and mid-season highlights to that same list of schools, and got in contact with more schools. After the season concluded, I sent my season highlights to that list of coaches for the third time, and I got in contact with a lot more programs. From there I kept in contact with the schools that I was most interested in, took a few official visits, and ultimately made my decision.

I would advise anyone who is interested in playing a sport to be very persistent throughout the whole process. Coaches are receiving hundreds of emails from athletes every week, so you have to keep trying to get their attention. Start the process early and try to attend camps at the colleges that you are most interested in. My advice for making your decision would be to go somewhere that you are satisfied with as a whole. Your sport could be taken away from you in college at anytime for any reason, such as an injury. Value your academics before the sport, make sure that the school has what you are looking to study. Most importantly, go where you are wanted. If you don’t feel “at home” when you are on your visit, it probably isn’t the place for you.

ST:  If I’m being honest the recruiting process was stressful because you don’t know what’s gonna happen and waiting is the worst part, waiting for the coaches to hit you back. But I’d say to any other athlete don’t worry and don’t lose hope because if you believe in yourself it will go a long way.

Q3. Why did you ultimately select Wayne State / Davenport?

MF:  I chose Wayne State because they have a great business school, a very diverse campus, an outstanding football program, and I love the city so being right in Detroit was hard to turn down.

ST:  I chose Davenport because most importantly they had a masters program for what I want to go into, secondly I visited once with the Head Coach and we talked for 3 hours and right then and there I felt I want this to be my coach, we went back and I meant the Offensive Line coach and I knew this is where I wanted to be. A big thing for me was diversity and there is so much of that at Davenport, and what could be better than having Grand Rapids 20 minutes away.

Q4. What are you most looking forward to next football season?

MF:  I’m looking forward to being a part of a new family, even if it’s 120 guys, I know that I will fit in well and be embraced by the team. On the field, I am very excited to have the opportunity to come in as a true freshman and compete for the starting spot at kicker.

ST: Next Season I just want to get bigger, learn the offensive scheme and better my game so I can battle for a starting spot my redshirt freshman season.